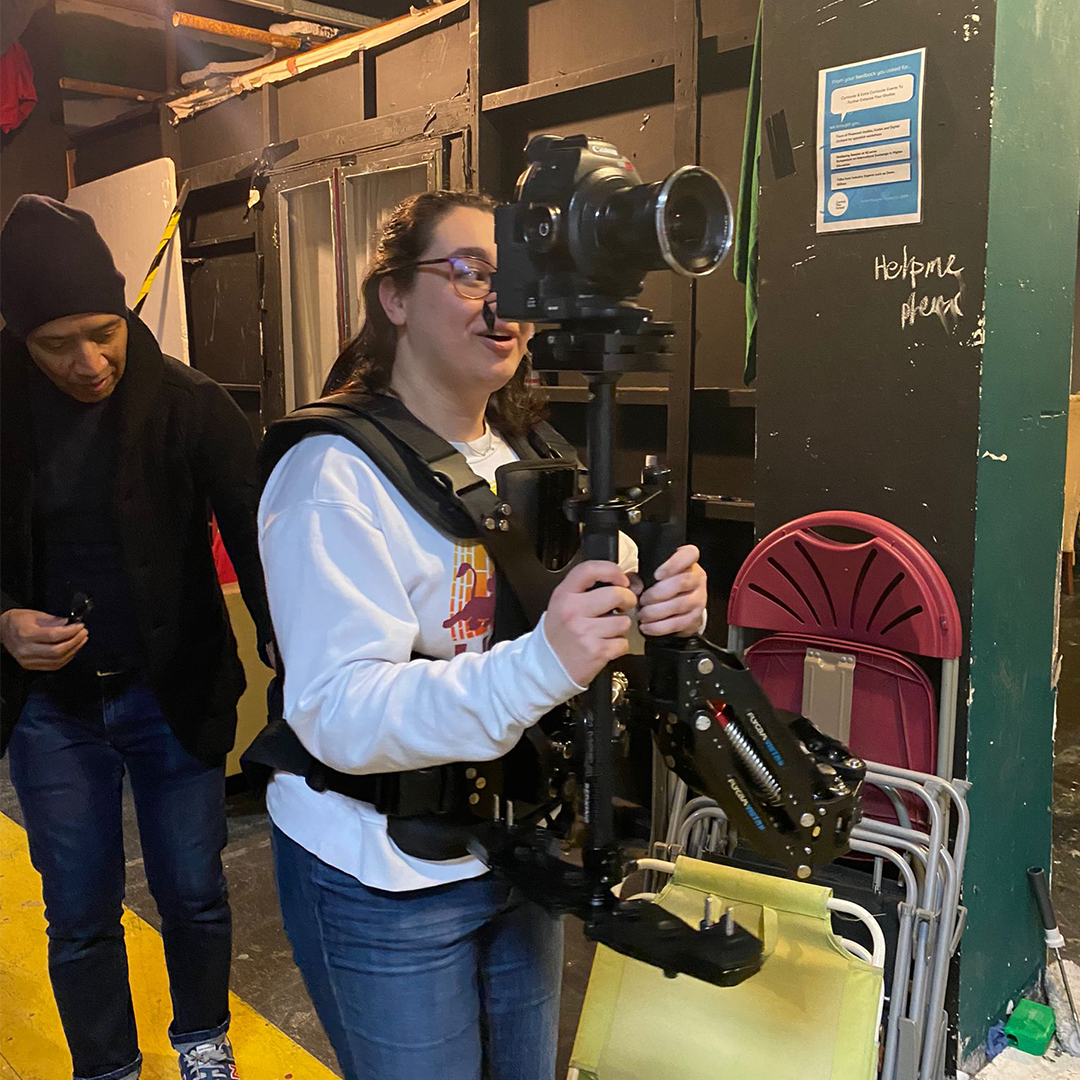 Hi! My name is Dani and I am on the MA Filmmaking programme with a specialism in Cinematography. I have known for years that I wanted to get into cinematography as well as screenwriting. So many people told me it was such an odd combo, but I say it’s not odd it’s just another creative mind marching to their own beat. Where did the love come from you may ask? Well, I love to tell stories and a camera gives me that opportunity to tell something visually. When I did my undergrad back in America, I took a class where for seven weeks we viewed a different film and spoke about all the different aspects it takes to create a motion picture. I always found myself focusing on cinematography even if the topic was colour or sound. I always wanted to get my hand on the camera. I’m so eager to learn and be challenged.

The most challenged I felt was when my classmates and I got introduced to Steadicam. Y’all if you’re claustrophobic I do not recommend you bring the Steadicam operator. It’s much harder than I imagined and quite heavy! Nonetheless, I did it (as pictured above). There is so much to cinematography than just the camera. You have the lighting, camera angles, and visual storytelling. Not to mention different shot types and ways of making a vision come to life. For me being behind that camera is my heaven on earth and it excites me. Even if I am just observing. Being creative and creating a world for audiences to connect and get lost in is my favourite thing.

Some of my inspiration draws from cinematographer Dick Pope who famously works alongside director Mike Leigh. What fascinates me with Dick Pope is his ability to create a world often with no script. Yes, Mike Leigh does not have scripts, he draws on improv with the actors and test shots with Dick and his team. Now, Dick has worked with other filmmakers and off scripts which is where the fascination comes in. To be able to create something the viewers can escape to with and without the words on a page first is honestly incredible. I was lucky enough to be in the same room as Mike Leigh and Dick Pope at a BFI screening of the newly remastered 4K version of Naked(1993) in November 2021. Where I learned Dick loves when students pick his brain about the film. I would love to get to talk with him one day! It was Naked that made me realise I wanted to be a filmmaker. There’s something Dick did when shooting Naked and that was the use of bleach bypass which he learnt whilst working on the film 1984 (1984) as a camera operator’s second unit. He then brought that into his filming of Naked which just gives off a gritty and raw vibe.

I could go on for hours, but I don’t want to bore you. That’s the story of my love for cinematography! I hope you enjoyed reading it.

Go forth and film on!